Little Boy Blue, come blow your horn.
The cow’s in the meadow…

For my day off on Tuesday, I went halfway to civilization where I pick up my mail. The post office is in a building with a restaurant, bar, general store, and gift shop. The building has internet access, so on my days off when I don’t want to deal with the heat and people in Babylon, I go twenty-five miles, buy a cup of coffee and a meal, and spend eight or nine hours using the internet. The food is decent (not great, but decent), and there’s one booth with an electrical outlet next to it. I’ve gotten friendly with the woman who’s the waitress and the cook all morning, and we chitchat a little when she comes by to see if I need anything. There’s never been a crowd any day I’ve been in there, so no one seems to mind if I take up a whole table for a whole day.

It was after five o’clock when I packed up and headed out on Tuesday afternoon, so it was close to 6pm when I got to my campground.

The first thing I noticed upon arrival was that the half of the gate still standing at the entrance to the campground was blocking half of the road. I stopped the van and got out to investigate.

Sometime back (I don’t know when exactly), a huge tree fell and smashed half of the gate, which is meant to block the access road when the campground is closed in the winter.

This photo shows the tree that fell and destroyed half of the gate into my campground. The brown metal pieces are the remains of the gate. The gate seems to have been made of strong and sturdy metal, and the tree just SMASHED it when it fell onto it.

This photo shows the side of the gate that’s still standing and is tied to a thin-branched bush with yellow plastic “caution” tape.

To hold open the half of the gate that’s still standing, someone had tied yellow plastic “caution” tape to the gate and to a thin-branched bush.

What I found when I surveyed the scene was that the “caution” tape had broken and allowed the gate to swing across the road. I swung the gate out of the roadway and managed to tie the remainder of the tape to the gate, holding it out of the way.

I’d only driven a little ways down the road when I looked to my left and in the meadow saw faces–cow faces! By cows I mean cattle. I’m guessing they were females because I don’t think bulls usually run around with the ladies, but I did not check bovine genitalia.

There seemed to be a lot of faces staring at me, but I didn’t get a head count.

I wasn’t sure what to do. Bovine invasion had not been covered in our training. Was it ok for them to be in my meadow? Did I need to report their presence, and if so, to whom? I figured my best course of action was to drive the three miles back to the neighboring campground and ask the other camp hosts what I should do.

The other camp hosts didn’t seem worried about the cows and said I didn’t need to report them to anyone. The man half of the camp host couple said he’d worked on a ranch. He told me these were half wild mountain cows who don’t see people much. It seems like they’re turned out to fend tor themselves during the dry summer months, then are probably rounded up for the winter. These are probably some of the same cows I’ve seen on the road on my way to and from the hot springs.

He also said if the cows were bothering me, he’d come and chase them away.

The cows were not bothering me. I just needed to know if I should report their location. And I’m not scared of cows! My uncle raised cows when I was a kid, and I’ve been around cows, petted them above the nose and between their eyes. I’ve even been licked by big sloppy cow tongue. And while I wasn’t going to trek into the meadow to try to pet a half-wild mountain cow, I think I could make enough noise to scare them away if they came up to my van and bothered me.

The cows are actually rather shy. I wanted some photos of them to include with this post, so I grabbed my camera. Like reclusive Hollywood stars, they turned their faces, then shuffled into the trees on the perimeter of the meadow. Like a paparazza destined for failure, I gave up after a few blurry shots. 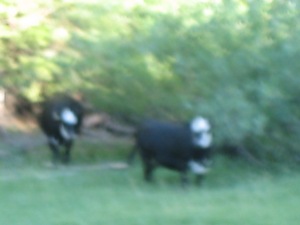 One of my blurry shots of shy cows.

On Friday evening, a couple of young women (who were perhaps a couple) checked into the campground. I told them about the cows (which I had seen over the ensuing days but had failed to photograph). As the women headed to the meadow on a late afternoon walk, I heard noise from the area. The noise was too loud to have been caused by two skinny humans, so I figured I must be hearing the cows. Sure enough, when I looked that way, several shy bovines were hustling into the trees, but one bold black one stood out in the open and stared at the two young women.

A bold black cow. (I took this photo a few days after the events written about in this post.)

As we all stood still, an amazing thing happened. Cow after cow came out of the trees. They strode away in single file. The cows in the line walked away slowly but purposefully. Where they were going, I don’t know, but they seemed to have a destination in mind.

I didn’t dash to get my camera. I was afraid sudden movement on my part would cause cow consternation, and I didn’t want to upset anyone. Maybe I’ll get another chance at photos. Or maybe we’ll only have a couple of blurry cow photos to look at.

I took this photo of cows in the meadow a few days after the events written about in this post occurred. There were about twenty cows in the meadow when I took this photo. I had to  use the zoom on my camera to get this shot. I could not get close enough to the cows to get better photos. Whenever they heard my footsteps, they looked up at me. If I got too close, the cows moved farther away.

Two bold cows. While most of the cows in the meadow were black, there were a couple of light brown ones. Some of the black cows had white faces.

I saw a lot of cow butts much like this one while I was trying to take these photos. 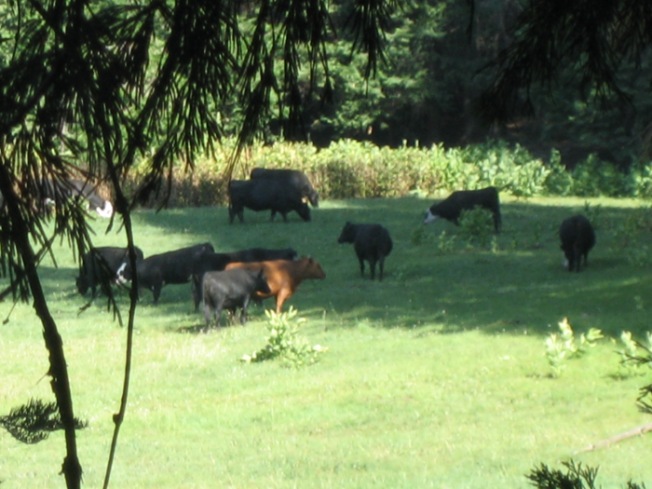