Photo I took in the Healing Garden.

Even before my tent was totally set up the way I wanted it, people were stopping by to chat and to buy things. Before the day was over, I’d paid my vending fee, plus a tiny profit. It’s nice to make enough to cover the vending fee on the first day of a multi-day event so I can quit worrying about my expenses and just bask in the profits.

I took this photo of my vending setup at NeoTribal The Gathering. I put up the curtain walls to block the sun, but they also gave me a tiny bit of privacy when I slept in the tent at night.

I quit trying to sell as soon as the sun set. I don’t have a generator, and there were no electrical outlets nearby, so even if I had brought electric lights, I couldn’t have used them. I didn’t try make any sales by the light of my two small lanterns.By the time I closed up the tent and had some dinner (which consisted of mashed potatoes so I wouldn’t lose my crown which was held in with temporary adhesive), I was too tired to think about partying.

I wasn’t sure about where to sleep. I knew I’d probably be more physically comfortable in the van, but I wasn’t 100% confident that my merchandise would be safe if I left it alone. I decided to sleep in my vending tent, so I schlepped over Nolagirl’s plastic tarp and one of my layers of memory foam, my pillow, my sheet, and my new Ikea blanket. I folded the tarp in two, laid it on the ground, then put my memory foam on top. Such comfort!

I didn’t even have to go anywhere to hear music. I was situated between two stages, so I spent the night in the middle of a perpetual electronic dance music mashup. Both my body and mind were tired, and I slipped into something of a trance state between sleep and wakefulness. It was sort of like being high without any of the problems of being on drugs.

I can’t say I slept well. Sleeping on the ground would have been more comfortable with two layers of memory foam between it and me. I was a little bit too warm too. At some point after the music stopped, I woke up to some guy yelling. I don’t remember what nonsense he was shouting, but I sighed and rolled over, thinking what a relief it was to be unaffiliated with the man losing his shit and screaming in the darkness. Later, the wind picked up and the side curtains repeatedly blew in my face. I worried about the stability of the pop up, but it held up fine. All ended well, and I got a few more hours of sleep.

Saturday was much of the same, although I (thankfully) didn’t have to haul, unpack, and set up all of my merchandise again. Being able to stay set up was such a blessing. 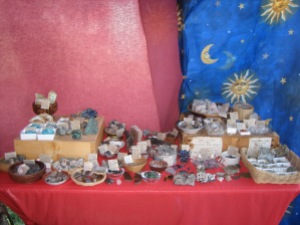 My rock table at NeoTribal The Gathering.

No way were there 500 people at the event. I think an estimate of 200 would be a generous exaggeration of the actual head count. I did well for the number of people who passed by my booth (and most people who passed by did stop and take a look at least once), but I did not do as well as I expect I would have done with a crowd of 500. Actually, it’s probably a good thing 500 people didn’t attend the festival. I don’t know if the four flush toilets (two in the women’s restroom and–I presume– two in the men’s), plus the five portable toilets could have comfortablly accommodated 500 people.

I think because I was in my tent with curtains closed by 8pm on both nights, I didn’t see much drug use. A couple of ladies came into my tent early on Saturday afternoon, and they were acting just a little strangely, and I wondered if they were high.They might have been just a little socially awkward. On Friday night, I heard some guys right outside my tent talking about “molly,” and I don’t think they were discussing a female friend.

However, a woman I’d gotten friendly with over the weekend told me early on Sunday morning that she’d been woken up in the wee hours of the morning by a couple she was confident was high on ecstasy fucking (her word) right outside of her tent. She said their heads were hitting the side of her tent. She said another ecstasy couple was also fucking (her word again) very close to her tent. The ridiculousness of the whole situation was that there was so much open space nearby but not close to any tents where these couples could have gone and not bothered anyone.

On Sunday afternoon, a fellow did ask me if I traded for “herbal medicine.” I told him no, I don’t use it.  Then I felt I had to explain that although I don’t use it, I don’t think it’s wrong, but in fact I don’t use it, and no one in my immediate vicinity uses it, so I really have no desire to trade for it. He seemed to understand, even though my explanation felt really clumsy to me.

The one other time I knew drugs were around was when I went up to the amphitheater because I had been told the closing ceremony was about to happen there. When I got up there, a reggae band started playing instead. The band’s front man immediately started singing about Israel and I got a huge whiff of weed. I realized the closing ceremony was not about to happen up there, so I left to finish packing up to leave. I’m not surprised (or even offended) by smelling ganja or hearing about Israel at a reggae show, but it’s not what I wanted to be doing at that moment. 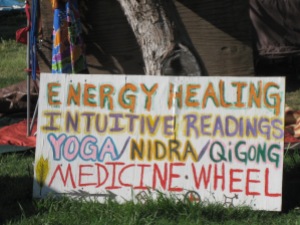 One thing that was really cool about the event was the age diversity of the folks who attended. There were families with babies and little kids, and much of the time, those kids were running around playing together. There were, of course, lots of young adult there for the music and dancing (and the sex and drugs too, for some of them.) I saw older couples and met a few women (probably in the 45 to 55 age range) going through divorces who had come for a day of healing away from their (soon to be) ex husbands. Several of my customers (including the young man who offered to trade for herbal medicine) were hanging out with their moms. Many festivals I’ve been to have been attended mostly by very young adults, so it was good to be somewhere with a wider range of ages. I think the age diversity was at least partially due to older folks coming to give and receive healing in the Healing Garden, as well as older folks coming for the drumming in the Heartbeat Village.

According the the NeoTribal The Gathering website information on Heartbeat Village (http://neotribalthegathering.com/heartbeat/),

For some there is a need to find that rhythm again for others there is a hunger to deepen that relationship to the earth  but for all there is a connection to each other and the planet through the Drum. Join us in the HEARTBEAT of Neotribal a space to create learn and experience healing through music dance and sharing. Instruments Drums and percussion will be provided by Neotribal free of charge for all that attend our workshops…

The ethnic diversity of NeoTribal The Gathering was a bit better than some of the festivals I’ve been to where all I saw were white people. As is typical in the Southwest, in addition to all the ostensibly white people, there were quite a few Latino/as. In addition there were some native Americans and a few African Americans in attendance. Again, I think it was the drumming circles and workshops that brought much of that diversity to the festival.

Overall, I’m glad I attended NeoTribal The Gathering, especially since I didn’t have to pay to park or camp. I made just about the amount of money I wanted to make. It’s always nice to meet my goal.

When Ms. Reiki tried to give me postcards to hand out before the festival, I told her that I don’t really know people in the area. She told me I’d make 40 new friends at the gathering. That was an exaggeration too, although I did have some good conversations with people (and shared a couple of nice hugs). I gave me card to folks I suspect I’ll never hear from again (and no one have his/her card to me.)

I don’t pretend to understand how the Universe works or why I end up at any particular place at any particular time. Maybe I was at NeoTribal The Gathering just to give a guy with dreadlocks and tattoos a good price on a piece of danburite that I’d been hauling around and putting out on my table for months. Or maybe I was there to listen to the older Navajo women attending the event with her son; I suspect I might have been the only other person there she felt she could relate to. Maybe my role was to offer my ear to the woman who needed to vent about the couple fucking against her tent. Maybe I was needed simply to provide a bag of ice for the elders’ luncheon when the organizers forgot to buy some.

I can’t really say why I was there, but I hope I did my part.

Bracelets and necklaces decorated with beads, baubles, and trinkets. 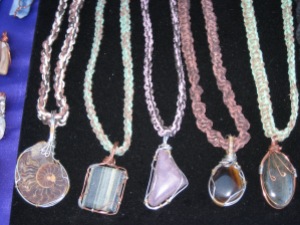 Pendants of wire wrapped stones by James Smith. Hemp work by me. 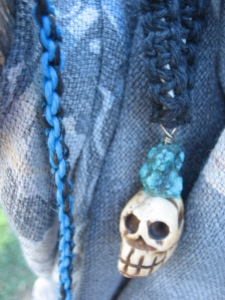