Around 7:30 on the Wednesday night before Independence Day Weekend, I got two sets of campers within ten minutes. I’d thought I’d have an empty campground again, but suddenly I had company.

The second camper pulled in before the first group had settled on a site, before I could collect money from them or write a permit.

I walked up to the car parked by the sign board where the driver was probably looking for the amount of the camping fee. I said hello and asked if she (for the the driver–the lone person in the car–was a woman who appeared to be in her 50s) was looking for a place to camp for the night.

She said she didn’t want to camp–she didn’t have a tent–she wanted to park–she slept in her car.

I was confused for a moment, but then I realized we don’t have rules against car camping. It doesn’t matter to me if a camper sleeps in a tent or in a car or on the picnic table as long as s/he is quiet and doesn’t burn the place down or cause other trouble.

I told her it was fine if she slept in her car, that the campsite fee was $20. She told me she was happy to pay it.

Then she looked directly at me and said, I know you understand.

I believe these trees are deeply nurturing and deeply healing. I know they are ancient, and I believe they are wise, in a tree way, although perhaps not in a way that humans can truly understand. I believe these trees can heal mentally and emotionally, so why not physically? Our mental, emotional, and physical states are all connected, so healing one state should help heal the others.

If I’d had open heart surgery recently, I’d probably want to sit with the sequoias too, and let their healing powers flow through me.

I did understand, but how did she know I did? I’m kind of undercover here in my camp host uniform, not exactly letting my freak flag fly. Somehow she took one look at me and knew I’d understand her. Being recognized that way was a wonderful feeling; it’s such a comfort to be known.

I saw her at the parking lot the next day. I arrived at work just as she was preparing to leave. She remembered my name. She said she’d been with the sequoias all day.

As she was about to pull her car out of the parking lot, she called me over and offered me one of her (delicious!) breakfast cookies.

I said, Hang on! I have something for you too!

I intended to grab a piece of rose quartz that’s been bouncing around on the floor of the van since before I left the city. Instead, remembering a lesson I learned about giving the best I’ve got, I grabbed my really lovely chunk of rose quartz from the console in the front of the van. 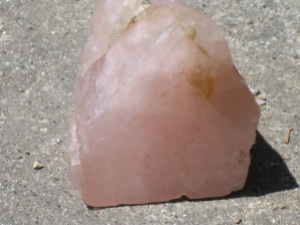 I took this photo of the piece of rose quartz I gave away.

I handed it to her through her driver’s side window and told her it was rose quartz, the stone of unconditional love and infinite and peace.

She said, I know what it is.

She said she was going to sleep with it on her heart. I told her I’d done exactly the same thing with it. I told her it has really good energy, that sometimes I’d put it on my forehead to calm me down when I was too agitated to sleep.

She was crying and she said, You gave me this to heal my heart!

I hadn’t thought it out and decided I’ll give this woman a piece of rose quartz to heal her heart, but rose quartz is healing, and it is all about the heart, so I guess she was right.

Sometimes I’m blessed with understanding I don’t even know I have. 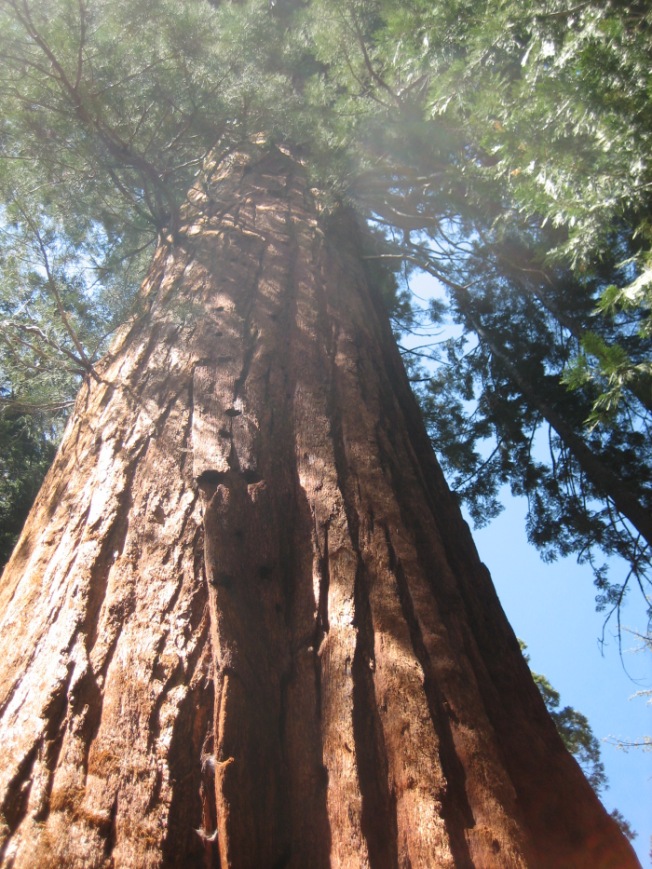 I took this photo of a giant sequoia.

To find out how I came into possession of that piece of rose quartz, go here: http://www.rubbertrampartist.com/2015/08/22/give-the-best-youve-got-a-lesson-in-giving-from-neotribal-the-gathering/.