When I arrived for work at the parking lot at 11am on the Saturday before Independence Day Weekend, it was already a clusterfuck.

All of the front parking spots were taken. There was a crowd of people milling around my co-worker. Some of the people in the crowd were standing in the roadway and wouldn’t move so I could drive the van through. I had to honk my horn to get them out of the road.

As I slowly drove around the parking lot loop, I didn’t see a single empty parking space. I did, however, see a tent set up in one of the picnic areas. As I tried to decide if I should stop the van in the roadway to talk to the person I could see standing in the tent, an unattended dog trailing its leash trotted across the street in front of me. I decided I did need to find the dog’s person, so I put the van in park and left it right where it was as I went after the dog.

The dog trotted toward the tent, and I called out Is this your dog?

A voice behind me said it was his dog and apologized for letting it get away from him.

As he reached for the dog’s leash, I took the opportunity to call out to the woman in the tent, Camping is not allowed here.

The man behind me echoed her, telling me they didn’t know they couldn’t camp there. That’s when I realized the man and the dog belonged to the woman and the tent.

If the couple had bothered to read the signs near the self-pay station (which I suspect they had conveniently overlooked), they’d have seen the one which reads, “No overnight camping.” 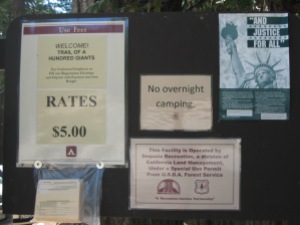 This is the board near the entrance with the informational signs, including “No overnight camping.”

I got back in my van and continued to look for a parking place. There was nothing. Some people had parked on the edge of the road, just barely leaving space for me to drive the van through. When I tried to tell them it wasn’t such a great idea to park there, they haughtily told me there was plenty of space for other vehicles to pass. I shrugged and hoped they wouldn’t come crying to me if their car was scraped or crunched by a giant truck or massive RV. No one did come crying to me, so everything must have turned out OK.

As I slowly made my way back to the beginning of the loop, I heard a loud cracking noise. I thought someone was shooting off fireworks or maybe firing a gun. I didn’t even try to find out what was going on, but my co-worker did. He told me later he’d heard the noise too and also thought it was fireworks or a gun. He went looking and found a man standing on one of the big boulders in the parking lot, repeatedly cracking a bullwhip. I didn’t think there were any rules against such an activity, but our supervisor told us later it’s considered a projectile and there is a rule against it.

When I got tot he front of the parking lot, I jumped out of my van and told my co-worker there was no place for me to park. I told him I’d put the van in the overflow parking at the nearby campground, then walk back to the main parking lot. He was preternaturally calm in the face of the chaos.

When I got back to the main parking area, my co-worker and I started warning people who drove in that the parking lot probably couldn’t accommodate them, but they could pay us the $5 parking fee on their way to the trail  if they did find a spot. I also warned people not to park anywhere “stupid.”

I found out my co-worker saw the people in the tent when he got to work and had already told them they couldn’t camp there. One thing I still don’t understand is why the tent was up when I arrived at 11am if my co-worker told them no camping when he arrived at 8am. Even if he didn’t talk to them until 9am, it shouldn’t take two hours to take down a tent and pack up a campsite that had been occupied for less than 24 hours.

It seemed like I’d been at work for a long time–talking to people in cars, writing day passes, and collecting fees from people who had found spots to park–when an older lady told me there was a smoking, smouldering campfire near one of the picnic tables. Can you guess which picnic area the campfire was in? Yep, the one where there had earlier been a tent.

I told my co-worker what the woman had told me and said if he’d go check on the fire, I’d take care of the front.

He briskly walked away and quickly returned. The illegitimate campers had gathered rocks and used them to construct a fire ring to contain their illegal fire. However, in their haste to leave, they’d left what remained of their fire smouldering. I don’t think there were any flames, but there was smoke, and presumably embers, which could have been blown away and started a wildfire.

My co-worker grabbed his large Gatorade bottle filled with his beverage of choice and took it to put out the fire. He said when he poured the liquid onto the remains of the fire, there was hissing and more smoke, and the water boiled and bubbled.

He decided to hop on his dirt bike and ride down to the campground to get water out of their tank. He wanted to be sure the fire was “dead out” (as the Forest Service signs say). 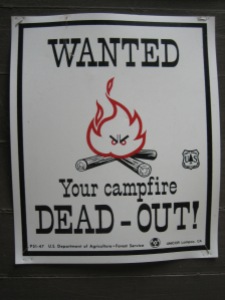 While he went to get more water, cars continued to enter the parking lot.

While I was trying to collect fees and write day passes, a woman approached me and asked where she could go hiking.

I am not a hiker. I enjoy walking on flat ground for about a mile, but the thought of a long, strenuous hike does not excite me. (Once in Utah, friends convinced me to go on a “little hike” with them. We ended up temporarily lost and very hot, and I had a head cold. When one of the friends commented, oh well, none of us are miserable, I raised my hand and declared that indeed, I was miserable.) Because I don’t like to hike, I haven’t really made it a priority to find out where to hike. I figure people who like to hike should do their research before they come out here or get information at a ranger station or buy a mp or find someone who likes to hike to talk to.

I made two hike suggestions to the woman; she’d already done both of them. Since that was the entirety of my hiking information, I hoped the woman would go away, but she did not.  Since I hadn’t  been able to answer her questions, I pulled out a topographical map of the area for her to look at. Of course, she couldn’t just look at the map and make some decisions for herself. She had to ask me if the little tree on the map was a symbol for a sequoia  grove. (After consulting the map key, I said it was.) Then she wanted to know how far it was from this place to that place. (I told her she should find the map’s distance key and consult it.) In between her questions (to which she could have found her own answers), I was hustling back and forth from cars to her. I’m all for helping tourists, but I don’t feel I’m responsible for reading a map for them and telling them which hikes are best when I’ve never been on any of the hikes. (You can bet I wanted to tell the woman to take a hike, but that would have been really rude.)

While I was still trying to satisfy the woman so she’d leave me alone, my co-worker zoomed back into the parking area and went to finish quenching the fire. It occurred to me that while we were working quite literally to put out a fire and keep things in the parking area running smoothly,this woman was insisting I give her information I didn’t even know. I was relieved when she was finally satisfied enough to walk away.