This is Dome Rock, seen from a distance. 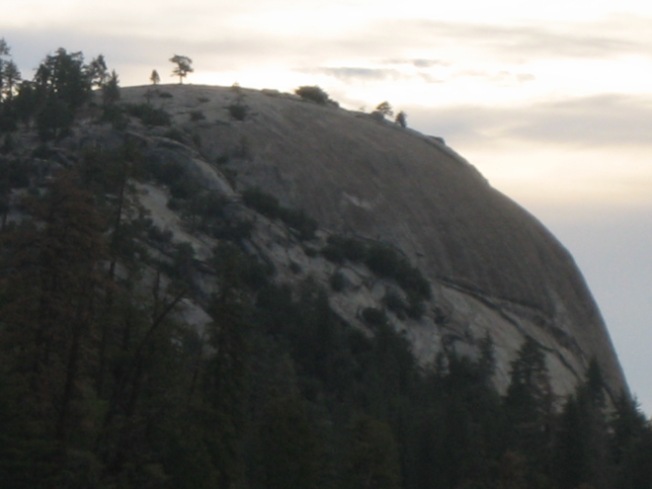 According to http://www.summitpost.org/dome-rock-ca/153955, Dome Rock “is a 400′ high by 800′ wide granite monolith.” It is located on the Western Divide Highway, between Quaking Aspen campground and the Trail of 100 Giants. Dome Rock is located at the end of Forest Service Road 21S69, which is directly across from the Peppermint Work Center.

I’d heard of Dome Rock for several weeks before I visited it or even saw it from a distance. I wondered what the big deal was. It was just a rock, right? What’s so exciting about a rock?

The afternoon I visited, I drove down the short dirt road, excited to see something new.

The dirt road ends in a wide area for parking. I wasn’t sure how exactly to get to Dome Rock, but I saw a green gate with a sign on it.

This is the sign I saw posted on the green gate.

I decided the rock must lie behind the gate. I walked behind it and headed up to the top of Dome Rock.

It’s not really a hike to the top of Dome Rock. I saw a faint trail and followed it up. The climb was a little steep, but not too difficult, even for an inside kid like me. The climb was absolutely nothing as intense as the climb to the top of Moro Rock in Sequoia National Park. (To read that story, go to http://www.rubbertrampartist.com/2015/08/02/i-climbed-it/.)

When I got to the top of Dome Rock, I realized the attraction is not the rock itself, but the view from the top of the rock. The view was amazing. Here’s a photo of mountains in the distance.

Of course, the photos my little camera produces don’t really do justice to what in real life is a fantastic view.

Here’s a view of more mountains in the another direction.

Are one of these peaks Mt. Whitney?

Mt. Whitney is apparently visible from the top of Dome Rock. According to Wikipedia, “Mount Whitney is the highest summit in the contiguous United States and the Sierra Nevada, with an elevation of 14,505 feet.”  I visited Dome Rock alone, so I had no one to point out Mt. Whitney to me. You’d think it would be easy to see the tallest mountain in the continental United States, but I didn’t see any mountain towering over all the rest.

Being on top of Dome Rock made me feel like I was on another planet. (I had that experience more than once in California.)

Dome Rock is so big that trees are growing on top of it. 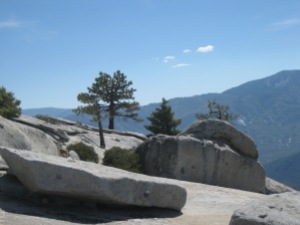 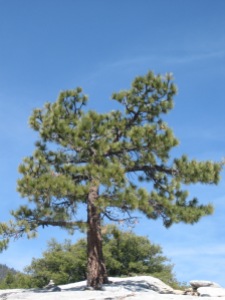 Pine tree on the top of Dome Rock.

Some of the trees on Dome Rock are dead. 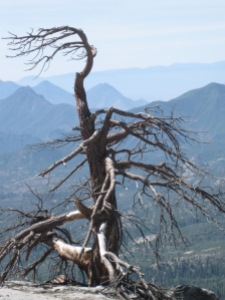 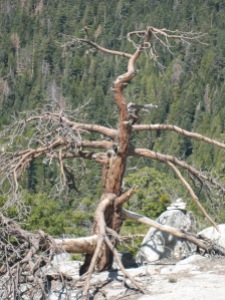 Someone had been up there stacking rocks.

Throwing rocks from Dome Rock is apparently a really bad idea. There’s another sign up there saying not to do it.

The next photo shows that there are no guardrails around the edges of Dome Rock.

See the edge there where it looks like the rock just ends? It really does! There’s no more earth on the other side of those rocks, just air and a loooooong drop.

According to a Forest Service informational brochure (which can be seen at https://fs.usda.gov/Internet/FSE_DOCUMENTS/fsbdev3_058930.pdf) visitors should “… be aware that there is no guard rail and the slope of the top of Dome Rock may be deceiving, with the drop to the bottom being hundreds of feet. Parents of young children should hold them securely while visiting the top.”

I scurried around the edge, wondering how close was too close. I suppose I didn’t get too close, as I didn’t plummet the hundreds of feet to the bottom.

It was very peaceful on the top of that rock. No other people where out there with me, and I didn’t hear a single sound produced by a human other than my own footsteps and breathing.

I didn’t stay on Dome Rock for very long. I hadn’t worn my hat, and the sun was beating down on my head. I enjoyed my visit and was glad to see a new outdoor attraction.