The shuttle I took from Visalia, CA to the Sequoia National Park dropped me and the other passengers at the Giant Forest Museum, so I decided to start my day there. 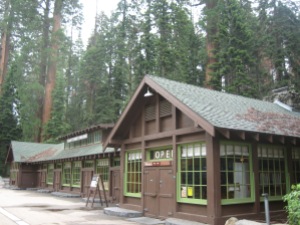 This is the building which houses the Giant Forest Museum.

According to http://www.hikespeak.com/attractions/giant-forest-museum-sequoia/, “The rustic building that houses the museum was built in 1928 on a design by architect Gilbert Stanley Underwood.”

I think the museum is intended for people who don’t know anything about sequoias because the information presented seemed pretty basic to me. One exhibit I did find informative was the comparison of giant sequoias and coast redwoods to other trees and things like the Statue of Liberty and skyscrapers. I also enjoyed the pound of giant sequoia seeds in a large plastic jar. The sequoia seeds look so much like oat flakes that when I saw the jar, I thought Why did someone leave a jar of oatmeal there? Upon closer inspection, I realized I was actually looking at over 80,000 giant sequoia seeds.

The Sentinel Tree stands outside the Giant Forest Museum.

The Forest Service schtick for the Sentinel Tree is how average the tree is. The informational sign goes something like this: You think this tree is big, don’t you? In fact, it’s just an average size giant sequoia. It weighs more than two fully loaded jumbo jet airplanes–700 tons–but it’s just average! Ha!Ha! Tricked you! This tree’s not so big after all. There are bigger trees around here.

According to http://www.hikespeak.com/attractions/giant-forest-museum-sequoia/, the Sentinel Tree is about half the size of the General Sherman Tree.

There are two lines on the ground outside the Giant Forest Museum representing the Sentinel Tree. One shows how wide the base of the tree is, and the other shows how tall the tree is. By walking along the line representing the height of the tree, a person can pretend s/he is climbing the Sentinel Tree. Every twenty or so feet, there is a metal tile with a drawing showing the height represented and the width of the tree at that height. I was walking that line, metaphorically climbing the tree, when the rain started coming down hard, sending me into the Giant Forest Museum for the second time that day.

After the museum closed and I was waiting outside for the shuttle to pick me up for the ride back to Visalia, tourists started hopping the fence around the Sentinel Tree so they could have their picture taken with it. The older couple who’d been working at the gift shop in the museum tried to tell the first group (teenage boys) why they should stay off the tree’s side of the fence, but the mother of the boys was the one with the camera, and she would not be swayed from getting the photo she wanted. Later, as the photo family walked near me to get to their car, I heard them laughing at the improbability of their actions killing the tree. Humans can be so short-sighted while imagining their own specialness. 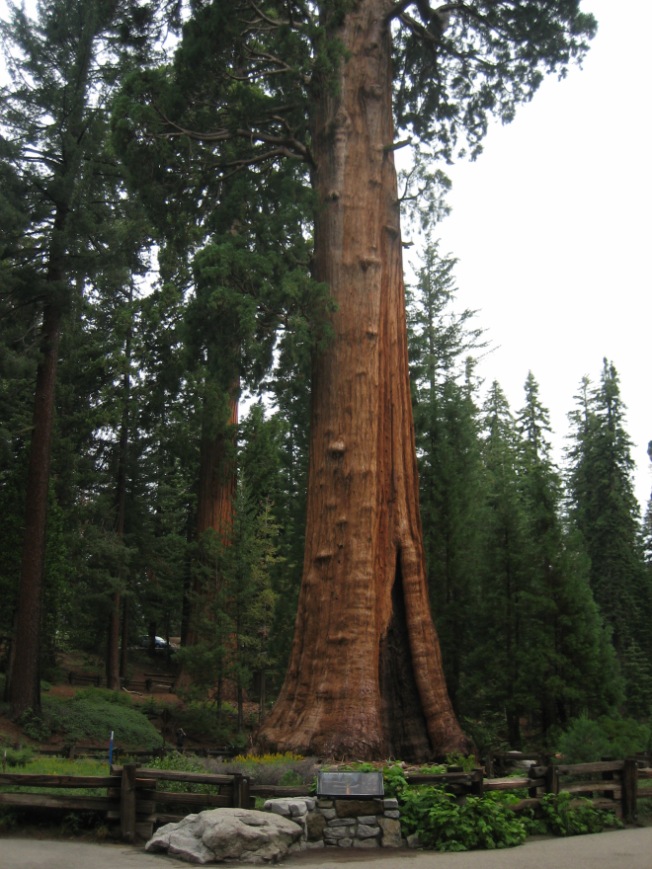 The whole view of the Sentinel Tree.

All of the photos in this post were taken by me.