I was selling my hemp jewelry and a few shiny rocks at a weekday urban farmers’ market. A busload of junior high school kids on a field trip were deposited there for some reason, and I had several 8th grade ladies at my table. Suddenly, there was an energetic woman on my left, halfway behind my table with me, telling me she loved my work and handing me a postcard about an event she was coordinating. She said vending cost $235, but she’d give me a better deal. Cool, thanks, I said and assured her we’d talk soon. I didn’t want to be rude, but I wanted to get back to my customers. Eighth grade ladies are my bread and butter.

When I got back to the host family’s house (after visiting the local IRS office and then the drug store where I had to buy temporary dental adhesive for my crown that had fallen out again), I took a look at the postcard the woman had given me. The event was called NeoTribal The Gathering and was bill as “3 days of camping & ceremonial bliss surrounded by the transformative energy of art, music, and dance.”

After doing some poking around on the internet and looking at the gathering’s website and the website of the Reiki healing studio of the woman who’d approached me, I decided they both seemed on the up-and-up. I sent Ms. Reiki an email saying I was interested and asking to talk soon.

I didn’t hear from her Thursday, so I called her and left a message on Friday. When we finally talked, she said I could vend for the three days of the event for $75. Then it came out that camping would be extra, payable directly to the park where the event was being held upon arrival. But Ms. Reiki said I was welcome to camp in the Healing Garden, the area she was organizing. She told me I would sell there too.

Healing is the art of restoration. The “Neotribal” Healing Garden offers Holistic Health & Healing for all participants of the gathering! Experience natural healing in many different forms. Our healing energy is a vehicle that will bring positive transformation to our families and our planet at large. Join us for hands on healing, bodywork, energy balancing, yoga, meditation, prayer and wisdom talks. Experience positive self care through spiritual & holistic education and cultural development.

I wasn’t really satisfied with all of the answers Ms. Reiki was giving me. I felt like she just wasn’t answering all of the questions I asked, or at least wasn’t answering my questions in ways that left me feeling I understood what exactly was going on. I wasn’t sure if she was somewhat unorganized or simply blissfully sure the Universe would somehow take care of everything. In hindsight, I think she was sure of the Universe and a bit awkward with verbal communication.

Ms. Reiki invited me to go to her house on Saturday after four when folks would be over painting signs for the event. I told her I’d be working on Saturday maybe until 5pm, so I’d decide depending on how tired I was. I ended up working until almost seven o’clock and not making it back to where I was staying until after 7:30. I was too exhausted to contemplate keeping my eyes open, much less driving, then meeting new people.

I went to Ms. Reiki’s house Sunday evening to drop off my vending fee. Even after I paid my money, I still wasn’t sure I was doing the right thing. By that point I was in, no turning back, but I wasn’t sure I’d make the right decision. But in some way I can’t explain, I felt as if I were supposed to be at the event.

I was a little nervous when Ms. Reiki said this was the first time NeoTribal The Gathering would be happening. She pointed out that over 600 people on Facebook said they’d be attending, with another 400 people saying maybe. She thought about 500 people would actually show.

I spent the next four days preparing for the weekend. After leaving Ms. Reiki’s house, I went to Nolagirl’s house and picked up her pop up tent. Of course, I also used the time to express all my concerns and doubts.

On Sunday, I also implemented my five necklace a day plan. 5 necklaces a day x 5 days = 25 new necklaces to sell at the event. I stayed up late and cranked out the five.

On Monday I went to the thriftiest of thrift stores to find colorful curtains to hang around the sides of the tent to block as much sun as possible.

Later in the week, I got The Lady and The Boy to help me set up the pop up tent so I’d have an idea of how to get it to work. I hung up the side curtains too, so I could get a feel for the whole setup.

I made my five necklaces every day (and some bracelets too), and I was well equipped for the festival.

I arrived at the venue, Estrella Mountain Regional Park in Goodyear, Arizona, before 8am on Friday. When I stopped at the pay station at the park’s entrance, I told the woman working that I was a vendor, there for the NeoTribal gathering. (I don’t remember exactly how I phrased it.) She said, I can tell…, and I thought she meant I can tell by that hippie van you’re driving that you’re here for the event. What she really said was, I can tell you where to find them.

She did tell me where to find them, and she handed me a pass to hang from my (nonexistent) review mirror. She never asked for money, and I noticed she had written VOL (volunteer) on the pass. Score!

I found the Healing Garden and found a close-ish parking space. There were already several tents set up and a few people moving round. It seemed like people were just waking up. 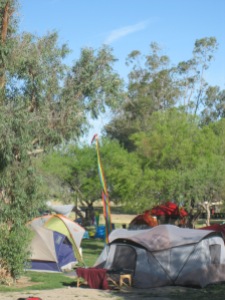 Some of the tents in the NeoTribal The Gathering Healing Garden. Photo by me. 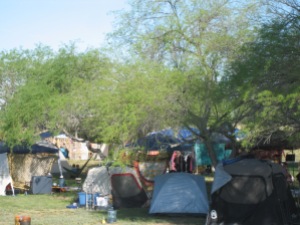 More tents in the Healing Garden. Photo by me.

I spotted Ms. Reiki, already busy, and walked up to say hello, good morning. We talked a bit about where I should set up. Then I was on my own to make trip after trip to and from the van  to unload the pop up tent and the side curtains and three tables and my chair and all of my merchandise. (I did ask for–and get–help to carry my large tub of rocks.)

I was mostly set up by 10:30, when everyone gathered for the ceremony honoring elders. The elders were a multicultural bunch: Latino/as, Native Americans, East Indians, people from Burundi and Bhutan, and white folks too. Little kids and adults joined together in singing “We’re a Rainbow Made of Children,” then people offered blankets to the elders.

There were way more blankets than elders, so several people were left holding blankets with no one to offer them to. A young woman (late teens or early 20s) came up to me and asked if I would accept a blanket. Awkward! I said, Oh Sweetie, I’m not that old, but thank you anyway. I think in that situation “elder” meant “person old enough to be your grandparent,” and I was NOT old enough to be that young lady’s granny.

The ceremony honoring the elders seemed very sincere, not about making the organizers look cool, but about giving love and respect to the older folks. I was moved to tear several times during the ceremony.

When the elders moved to their luncheon, I moved back to my booth to finish setting up my rocks.

To be continued at http://www.rubbertrampartist.com/2015/08/17/neotribal-the-gathering-part-2/.