I finally moved from the campground where I’ve been acting as camp host to my very-own-for-the-summer campground.

I’d been told to leave my supplies and tools at the temporary campground, so I arrived at my campground with no broom and no shovel and no garbage bags. I couldn’t sweep the restrooms, and I couldn’t clean the fire rings. I needed to work at least a couple more hours, so I set out to pick up micro trash.

I spent over an hour and a half removing bits of trash from the ground. The campground only has ten campsites, so I wasn’t dealing with a very big area. The trash seemed older here: the metal bottle caps were rusty and the plastic ones were squished into the dirt. This year is the first time this campground has had a host, so I guess no one’s picked up micro trash in a long time. Maybe it’s never been done.

The grossest thing I found all day? A condom.

At the back edge of site 4, where the campsite has almost turned into the forest, I found an unwrapped, unrolled condom on the ground. I’m going to assume it had been used. I grabbed a good size piece of loose plastic out of my makeshift trash bag and touched the condom with the plastic and not my fingers.

To be fair, the condom looked as if it had been lying on the ground for quiet a while, and the campground only officially opened a few days ago. Maybe there are no trashcans in the campground in the off season. But if ever there were something packed in that needed to be packed out, it was this condom.

This is just the sort of thing which will eventually give Woodsy Owl a heart attack.

Give a hoot! Don’t throw your used condom on the ground, ya idiot!

The last couple of days, I have been cleaning fire rings and picking up trash. I don’t mind either of these chores.

Cleaning fire rings is physical in an I’m toughening up sort of way, but not in an I’m going to die sort of way. I do not like physical activities that make me think of death. Also, I can clean the fire rings at my own pace. I would like it less if I had to hurry.

Picking up trash is ok too, especially since I started thinking of it as going on a hike with a trash bag. Actually picking up trash is kind of fun. I feel like I’m on an Easter egg hunt, but instead of finding yummy treats, I’m finding…trash. At least picking up trash puts my OCD tendencies (thanks, Mom) to good use.

I’ve been picking up what is called micro trash or pocket trash. This is the little stuff. Sure, I’ve found a couple of rusty metal cans (which, were I in New Mexico, I’d be compelled to whip into what The Lady of the House and I refer to as Tetanus Art); a plastic grocery store sack; six empty, new-looking Keystone Light cans; and some ripped up newspaper, but mostly I’m picking up small stuff.

metal bottle caps (most are from beer bottles; Corona seems to be the brand of choice around here)

broken glass in various sizes (some of it melted in campfires)

tiny round plastic bb’s in a variety of colors

cigarette butts (surprisingly few, most of them in fire rings) 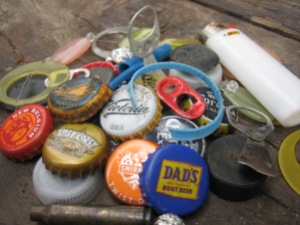 Here’s a photo I took of a sample of the trash I found. There’s no glass in this sample because I didn’t want to put glass in my pocket for a later photo shoot.

I did find some treasures while picking up trash. The best is the race car, but the googly eye is cool too. I also found the quarter and the two pennies shown here. After I took this photo, I found another quarter and a dime.

I don’t understand how so many metal bottle caps and plastic caps from water bottles get on the ground. Are people purposely dropping them? Do these folks have living rooms knee deep in bottle caps because they can’t ever be bothered to throw the caps in the trash? Or is it because they are on vacation and so relaxed that they can’t throw away the bottle caps? Ok, so maybe someone is sitting down and they don’t want to stand up to walk over to their trash bag, but couldn’t they just hold the cap until they stand up later?

The thing that really gets me about the trash on the ground is that there are trash cans all over this campground. I’ve been to campgrounds before (usually free ones) where there are no trash cans. Folks are supposed to pack out what they packed in. Not everyone wants to do that, so people try to burn their trash. Or, with the thought that it will be easier for whomever cleans the campground to pick up trash all in one spot, people will leave their trash in the fire rings. I would understand what was happening if there were no trash cans around here, but that’s not the case.

I guess I should think of it as job security for me, but it irks me to think of people littering in such a beautiful place.

I know I’m probably preaching to the choir here, but folks, put your trash in trash cans! If you are out somewhere with no trash cans, pack out what you packed in. And if you want to be a true good citizen, pick up other people’s trash too. Woodsy Owl will thank you.