The last time I drove I-15 to Vegas, I stopped at Alien Fresh Jerky in Baker, CA. I was looking for a penny press. As I said in my post Squashing Pennies, I have a friend who likes pressed pennies, so I try to get one for her whenever I see a penny squishing machine. I stopped in Baker in December 2016 because a reader of Roadside America said Alien Fresh Jerky had a penny press. Alas, Roadside America reader was wrong.

This photo shows the Mad Greek Cafe in Baker, CA. The Country Store–and its penny press–are right across the street.

When I told The Poet and The Activist of my fruitless search for a penny press in Baker, The Poet told me where I could find one in the town: The Country Store. She told me it was across the street from the Mad Greek Cafe on the main drag, and she was exactly right!

When I pulled up to the Country Store, I saw the penny press machine right outside the front door. I love the convenience of not having to go into a store to use a penny press, but is the press left outside all night? Is no one trying to steal these things? Maybe they are too heavy for easy theft.

In any case, my first order of business at the Country Store was a visit to the restroom, which I found to be adequately clean and comfortable. I didn’t spend a lot of time in the store, but when I passed

This photo shows the front of the Country Store. I managed to cut out the “C” in “Country” and include an innocent bystander.

through, I saw a lot of prepackaged dried fruit, nuts, trail mix, and other snacks. The store also had souvenir items for sale, especially items pertaining to Route 66. In fact, the store’s inventory reminded me of what I’d seen the year before at Alien Fresh Jerky. In any case, I wasn’t interested in snacks or schlock aimed at tourists. All I cared about was that penny press.

When I exited the store, I had to dig around in my van to find two quarters and a penny to use in the press. I found a penny in one of the cups on the console between the two front seats, then grabbed a couple quarters from my laundry stash. I was ready to go.

The penny press at the Country Store gave me four choices of designs to press into my penny. I could have an image of the Country Store itself (boring!); one of a desert tortoise; a cluster of desert images, including a cow skull and the proclamation “Gateway to the Mojave;” or an image of the World’s Largest Thermometer. The tortoise, was nice, but since I’ve never seen one in real life, I didn’t think I should press one into my friend’s souvenir penny. “Gateway to the Mojave” was nice too, and I have driven through the Mojave, but since I haven’t seen a cow skull or much else while passing through, I didn’t think that design was the right one. I had, however, seen the World’s Largest Thermometer before, and in fact could look to my right and see the thermometer in real time, so that’s the design I picked.

This photo shows the penny press in front of the Country Store in Baker, CA. The press does seem to be secured to the wall, which probably discourages thieves.

Even though the machine was the manual kind and I had to turn a crank to press the penny, it didn’t take long to make a souvenir for my friend. I was back in my van and on my way to Vegas in just a few minutes.

Do you know where the world’s largest thermometer is? 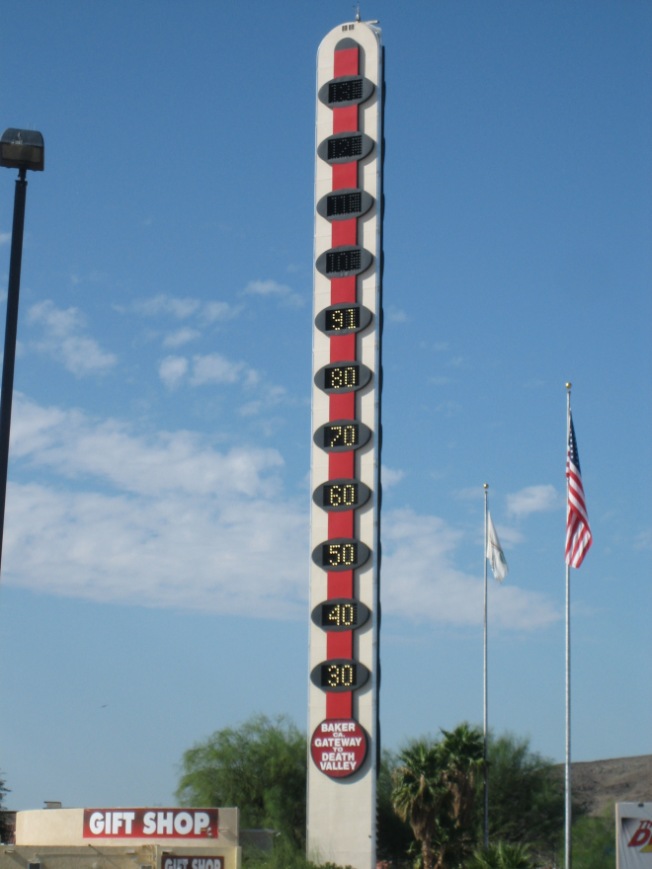 If you looked closely at the above photo, you’ve probably guessed it’s in Baker, California. You’ll also see that Baker, which is close to the Nevada border, calls itself the “Gateway to Death Valley.” 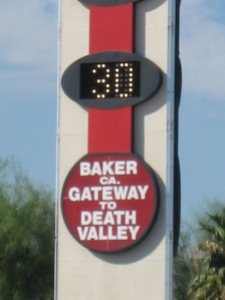 According to Roadside America,

The World’s Largest Thermometer is a 134-foot-tall symbol of the record high temperature in the U.S., in nearby Death Valley — 134 degrees Fahrenheit in 1913.

It was still early in the day (around 11am, I think) and only 91 degrees. I wanted to see that sucker lit way up, but it wasn’t hot enough for that.

Here’s the history of the thermometer, from the aforementioned Roadside America Article

Willis Herron, a businessman, dreamed of a huge thermometer for 25 years before he made it real in California’s high desert.

The site chosen for the thermometer was along the main drag through town [Baker], visible from the interstate. In 1990 Herron paid to have the thermometer constructed by Young Electric Sign Co., manufacturers of many neon and bulb monstrosities on The Strip in Las Vegas. 33 tons of steel and almost 5,000 lamps went into the three-sided digital display.

But strong winds broke the thermometer, smashing a gift shop under construction. Herron, undaunted, had the thermometer rebuilt, filled with concrete…

Herron died in 2007. In 2012 the Baker thermometer stopped working and was put up for sale. Its owner blamed its shutdown on a bad economy and a thermometer-topping monthly electric bill. In 2014 the thermometer was purchased by Herron’s daughter, and his widow paid to repair the thermometer; it was officially turned back on Oct. 11.

Willis Herron’s decision to build his thermometer 134 feet tall has proved to be just tall enough, as the highest temperature it’s recorded was 127 degrees in August 1995.

When I pulled off of I-15 at exit 246, and drove through Baker to get as close as possible to the attraction, I felt as if I had been there before, although I didn’t have any memory of the thermometer. I thought maybe Baker was the place where Mr. Carolina, Sweet L, Robbie, the Fighting Couple, and I  slept the night we left Las Vegas. However, as I drove through town, I didn’t see where we might have parked or where everyone would have gone after piling out of my van. Maybe we slept at a rest area somewhere right outside of Nevada and then went to Baker in the morning? If we did stop in Baker, it was only for a short time, but how could I have forgotten about seeing the world’s largest thermometer? The workings of my memory is very mysterious.

In any case, now I know I’ve seen the thermometer, and I have photographic evidence to prove it.