I’d been to Las Vegas one time before.

It had been a three night whirlwind dirty kid tour of eating strawberry shortcake and drinking fine tequila we pulled from trash cans, exploring the Hard Rock Hotel while high on the finest of hallucinogens, and napping in a park during the daylight because we’d been awake all night. We’d been kicked out of Caesars Palace when Sweet L accidentally hit a slot machine with his knee and a panel popped open, exposing wires and lights. We’d apparently been banned for life from the Las Vegas Margaritaville location after we’d tried to take a shortcut through a barricaded area in the wee hours of the morning. We strolled The Strip for hours, marveling at the excess of the casinos, watching the water shows performed by the Fountains of Bellagio, pressing in with the crowd to see pirates battle sirens in the cove in front of Treasure Island.

We even gambled one night. Mr. Carolina asked me for a dollar, and I gave him one from my meager stash. He put the bill in a slot machine, and he and I took turns pushing buttons (he knew what he was doing, but I had no clue), until we were up $5. I insisted we cash out, while he stared at me incredulously. He knew we’d never win big if we didn’t play big, but I wanted the five bucks to buy gas for the van.

We mostly saw rich people, or at least people rich enough to take a holiday in Las Vegas. In addition to the rich people, we saw the workers in hotels and casinos and gift shops who served the tourists.

We also saw locals putting the hustle on visitors. We saw people dressed up in costumes (superheros, Muppets, Disney characters) hoping to have their photos taken with tourists in exchange for a tip. (For an interesting discussion of these folks in costume, see http://www.vegassolo.com/vegas-costumed-panhandlers/.) We saw panhandlers (especially on the bridges used to cross from one casino to another while bypassing vehicular traffic) asking tourists for spare change. At one point, I was carrying around a white takeout box we had pulled from the trash, and a local woman asked me for my leftovers! I thought that was funny and weird, because in no way did we look (or smell) like Las Vegas tourists. I told her she could have the food, but she changed her mind when I told her it had recently been in a garbage can.

Almost exactly three years later, I found myself back in the city, but this time I got to see the other Las Vegas.

I was visiting my friend The Poet and her husband (who is now my friend too) The Activist. They’d moved to West Las Vegas in March, and now it was October.

West Las Vegas is an historic neighborhood in Las Vegas, Nevada. This 3.5 sq mi (9.1 km2) area is located northwest of the Las Vegas Strip and the “Spaghetti Bowl” interchange of I-15 and US 95. It is also known as Historic West Las Vegas and more simply, the Westside.[1] The area is roughly bounded by Carey Avenue, Bonanza Road, I-15 and Rancho Drive.[2][3]

(I highly recommend this Wikipedia article, as it explains a lot about the history of segregation in Las Vegas.)

The Poet and The Activist are involved with Nevada Desert Experience. According to the group’s website (http://www.nevadadesertexperience.org/history/history.htm),

In the 20th century, the Western Shoshone Nation’s homelands began to suffer from nuclear weapons testing conducted by the U.S.A. & the U.K. A few peacemakers came out in the 1950s to challenge the nuclear testing, and a few more in the 1970s. People of faith gathered for the first “Lenten Desert Experience” at the Nevada Test Site in 1982 to witness against ongoing nuclear violence. Soon the resisters were calling their movement “Nevada Desert Experience” (NDE). The name also refers to an organized activist group which continues to conduct spiritually-based events near the Nevada National Security Site (the NNSS/NTS) in support of peace and nuclear abolition. NDE celebrates the power of God’s creation, analyzes the tragedy of the nuclear weapons industry, and calls for ending the destruction and repairing the damage.

The Poet and The Activist live in a cute little house that includes the NDE office. Their place is in a compound with two other houses where activists live. Each house is painted a lovely bright color, and they all face a tranquil courtyard. My friends have a guest room, where I stayed during my visit.

The Poet and The Activist also work with the Las Vegas Catholic Worker folks, although neither identify as Catholic. They are both definitely workers, arriving at the Catholic Worker house (500 West Van Buren Avenue) around six o’clock several mornings each week to meet the folks they work with to serve a 6:30 breakfast to a couple hundred poor/homeless/hungry people who gather in an empty lot at G & McWilliams Streets.

I got up early too on two mornings during my visit and helped serve breakfast.

The breakfast crew is a well-organized bunch. When we arrived at the Catholic Worker house a little after 6am, folks were gathered in the common room off of the kitchen for their morning prayer group. Breakfast was already cooked, and food and equipment were ready to be loaded on a trailer for the trip of several blocks to the lot where the morning meal is served Wednesday through Saturday. Before we left, the dozen or so of us there joined hands for another prayer. (I’m not one to pray much, so I just bowed my head politely and kept all snarky comments to myself.)

Christ of the Breadlines by Fritz Eichenberg – mural outside the Catholic Worker Houses – painted by Q (image from Las Vegas Catholic Worker website–http://www.lvcw.org/)

When we arrived at the site of the meal, I was surprised by two things.

#1 There were a lot of people there. I didn’t try to count, but I estimated there were 200 people. The Las Vegas Catholic Worker website (http://www.lvcw.org/) confirmed my estimate. I knew Las Vegas is a major city (with a 2013 population of approximately 603,500, according to https://www.google.com/search?q=population+of+las+vegas+nv&ie=utf-8&oe=utf-8), but I was surprised to see so many people in need in one place.  Based on my prior Las Vegas experience, I would have said the city didn’t have a large homeless/poor population. I would have been wrong about that. (I tried to find an estimate of the number of homeless people in Las Vegas. I couldn’t find statistics pertaining specifically to the city, but according to the Nevada Homeless Alliance 2015 homeless census, 34,397 individuals experience homelessness in southern Nevada. To learn more about the Nevada Homeless Alliance, go to http://nevadahomelessalliance.org/.)

#2 All of the people waiting for breakfast were lined up and waiting for the food to arrive. They’d obviously done this before. There were six or eight lines of people. When the food arrived, the folks serving the food set up at the front of each line and started dishing out breakfast.

I was not surprised to see that most of the people waiting for breakfast were men. In most of my experiences with services for poor/homeless people and being on the streets, men typically outnumber women (with the possible exception of clients at food pantries). I’d say out of the approximately 200 people there to eat breakfast, maybe 10 were women.

After seeing so many homeless people gathered for breakfast, I was outraged by the number of obviously abandoned houses throughout West Las Vegas. I was totally flabbergasted when my friends and I went downtown, and I saw abandoned hotels. 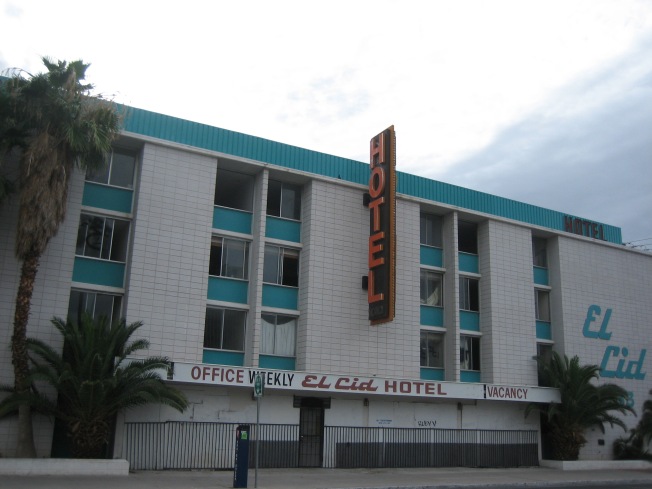 El Cid Hotel was just one of the obviously abandoned and fenced off hotels I saw in downtown Las Vegas.

I was outraged and sputtering while standing in front of El Cid, taking photos and outlining how Las Vegas could alleviate homelessness. My friends just shook their heads and said the city was unlikely to do any such thing.