I was going to sell jewelry and shiny rocks in a parking lot craft market near Roosevelt Row during First Friday. I arrived early, so I walked around a bit and took some photos of the murals painted in the area.

This mural is on the wall of a very small parking area. If a car had been parked in this spot, I’d have never seen this mural, much less gotten a photo of it.

The paintings in the next several photos are on a building on 4th Street, almost on the corner of Roosevelt. The actual corner of 4th Street and Roosevelt is a vacant lot, so this mural is visible from Roosevelt Street. 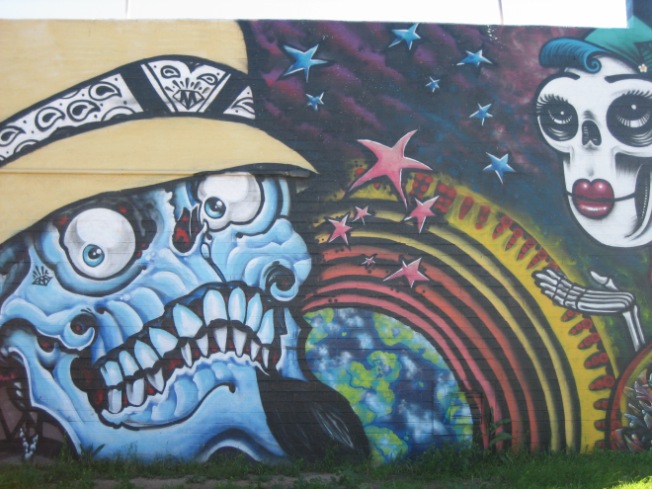 This is about one-third of the full mural.

This is a detail of the detail. I really like the Day of the Dead-meets-flapper look, although I’m not sure how a skull could possibly have lips and eyelashes.

And how could a skull have eyeballs? I do like this dapper skull guy.

The other two thirds of the mural has a different vibe, more ethereal and dreamy. 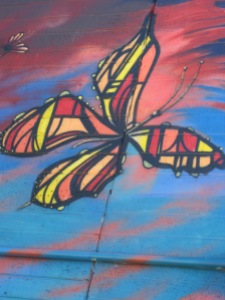 I found out online that this portion of the mural was painted by Tato Caraveo. http://www.thelostleaf.org/Murals.aspx

This portion of the mural is also by Tato Caraveo. To see him working on it, go to http://www.thelostleaf.org/Murals.aspx and scroll down. 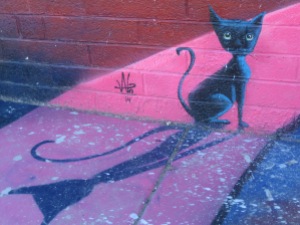 The next piece has more of a graffiti vibe to it. It was painted just under the rafters of what seems to be an abandoned house. 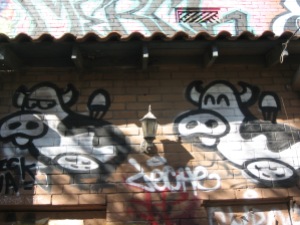 I believe I took this photo of cow graffiti between 4th and 5th Streets on Garfield, but maybe it was between 5th and 6th Streets…definitely on Garfield though.

The last piece is at 3rd Street and Roosevelt, and I took the photo the next afternoon when I was out and about with Nolagirl.

This mural was painted by Lauren Lee, and it’s called Three Birds.

The building this mural is on is scheduled for demolition. By the time you read this post, this mural will probably be forever gone.