This incident took place several weeks ago, before I moved to my campground, when I was still filling in at the larger campground.

I made it back to the campground on the afternoon of my second day off ten minutes before the snow started. Twenty minutes after the snow started falling, there was a dusting on the ground and on the branches of the trees. After that, the eerie fog rolled in. I turned on my little propane heater and read for a while before going to sleep.

In the morning, the sky stayed grey, and the fog clung to the tops of the tall trees. The air was cold even after the snow melted, and I did my paperwork while sitting close to the heater.

Around three o’clock, I felt like a pretzel with cabin fever after spending hours curled up on myself in the van. I put my jacket on over my uniform (which was on over my long underwear) and went to sweep restrooms.

I was working on the four-plex of vault toilets near the front of the campground. I’d done the two women’s toilets  and had just walked around to the other side to do the men’s. I looked across the small concrete porch to the other side of the building and saw a…creature…looking at me.

The fog had me on edge already, and I didn’t think there were any campers in the campground, so my brain didn’t immediately register the grey, fluffy-headed, pointed-eared creature as “dog.” My brain sort of thought “bear” and sort of though”Ewok,” but mostly thought “SURPRISE!” I yelled, not a full-on blood-curdling scream, but a yell loud enough to alert the dog’s person.

The woman came over. I blamed my edginess on the fog, which was true. I also told her I didn’t realize anyone was in the campground. She said they’d only been there about ten minutes. I complemented her on their tent assembling skill, because their tent was already up.

The woman told me she was there with her husband. They only lived about twenty-five miles away, but it was their anniversary, and they’d decided to go camping to celebrate.

People are different, and thank goodness for that. (One of my dad’s right-on little nuggets of wisdom is If everybody liked the same thing, there wouldn’t be enough to go around.) But if I were having an anniversary, I would not want to spend it in a tent in a wet, muddy, cold, foggy campground. (I’m more the comfy warm bed type.)

I asked her about the dog’s parentage. He was mostly husky, she said, but his father had been part timber wolf. He was a big, grey, handsome, friendly dog. He was running around the otherwise deserted campground, and it was beautiful to see. He was one of those dogs that is just a natural athlete.

He particularly enjoyed running alongside the golf cart as I drove. He ran with me when I went to the group site area to sweep the restrooms there. I could see how wet he was from running through the soggy meadow and moving through the misty air.

I wondered how those people were going to have anniversary sex with a big, wet dog in the tent with them. For the sake of their marriage, I hope he spent the night in the truck. 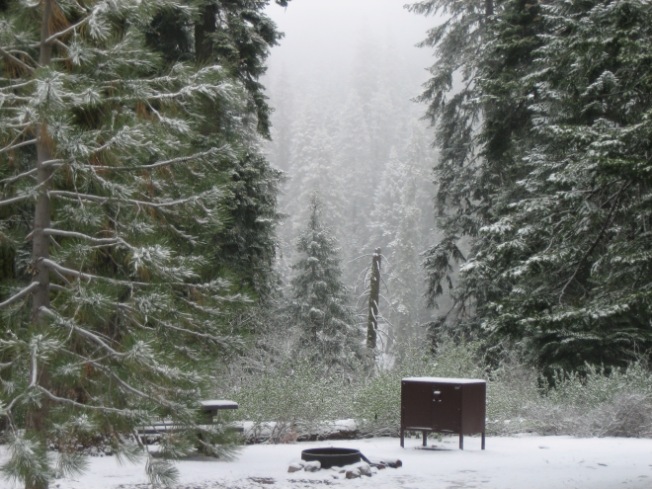 The fog had me on edge…(This photo by me.)