The camping season may be coming to an end, but my first weekend back in the big campground was a busy one. On Friday night, I only had three regular campsites rented (and six of twenty-eight rented on Saturday night), but I had four group campsites (with 14, 16, 17, and 31 people on them) occupied.

The golf cart had a leaky tire, which by Thursday evening was too flat to roll, so on Friday afternoon after I worked my four hour shift in the parking lot, I walked all over the big campground to check-in everyone. It’s not much of an exaggeration to say that in this bigger campground, it’s a farther walk from my van to the nearest restroom than it was to walk from one side to the other of the smaller campground where I lived and worked. So by dark on Friday night, I was tired.

When I got into bed a bit after dark on Friday, the folks who’d reserved group site C had not arrived. I hoped maybe they wouldn’t show because I had plenty of work without them. However, when I got to that side of the campground on Saturday morning, site C was definitely occupied by an extended Latino family.

The man who’d made the reservation was still asleep, I was told by his wife, whom I’d happened upon in the parking area. I got the information for the permit from her and told her about the fire ban that was still very much in effect in the National Forest. When I told her no campfires were allowed, she seemed disappointed, but agreeable.

I walked over to another campsite to ask a question of the camper. The woman there asked, We’re allowed to have campfires?

When I said no, she pointed to the campsite I’d just left. From where we stood, we could see smoke streaming from that site. I said I’d investigate. I thought maybe we were seeing smoke from breakfast cooking on a portable gas appliance, but the woman who’d pointed out the smoke said the campfire had been going all night.

I walked back to the campsite with the alleged fire. I found the woman with whom I’d spoken only moments before, the woman I’d told explicitly no campfires. I told her I saw a lot of smoking coming from her campsite and asked if they’d had a campfire. By this point I was on the campsite and could see smoke drifting from the fire ring. Busted!

The woman admitted they’d burned a few acorns (I think she meant pine cones), but said they hadn’t brought any wood to burn. I told her I’d get a bucket of water to put out the remnants of the fire.

Thankfully, one of the other camp hosts was in the campground, driving the company truck to pick up trash. No way did I want to carry a five gallon bucket of water (that’s over 40 pounds, folks, awkwardly carried with one hand holding a flimsy handle) all the way from the water tank to campsite C. I filled the bucket, and the other host lifted it into the back of the pickup. He drove us over to site C and even offered to carry the water to the fire ring. I walked over with him.

When we walked right up to the fire ring, I saw it did not contain the remains of a few acorns (or pine cones). In the ring was a rather large charred piece of wood. No wonder there was so much smoke. (And we all know, where there’s smoke, well, if there’s no longer fire, you can bet there was fire earlier.)

As my co-worker dumped the water on the hot remains of the fire, several older women wrapped in blankets and sitting at a picnic table nearby began shouting No! No! No! in Spanish. I told them having the fire was illegal, but my co-worker started talking over me, telling them about the fire ban I was perfectly capable of explaining. (Thanks for the sexism, dude! I guess that’s what I get for not being able to carry my own 40+ pound bucket of water.)

Of course, the campers claimed they didn’t know about the fire ban, although

#1 There are “No Campfires” signs throughout the forest, including at the front of the campground they were staying in.

#2 The state has been suffering a drought for four years.

#3 Coverage of nearby wildfires is all over the news.

I can’t say I really believe they didn’t know they shouldn’t build a fire.

When I went back later in the morning to get the man who’d made the reservation to sign the permit, I said to his wife, No more campfires, right?

I decided if I found evidence of another campfire during their stay, I was turning the situation over to the Forest Service. 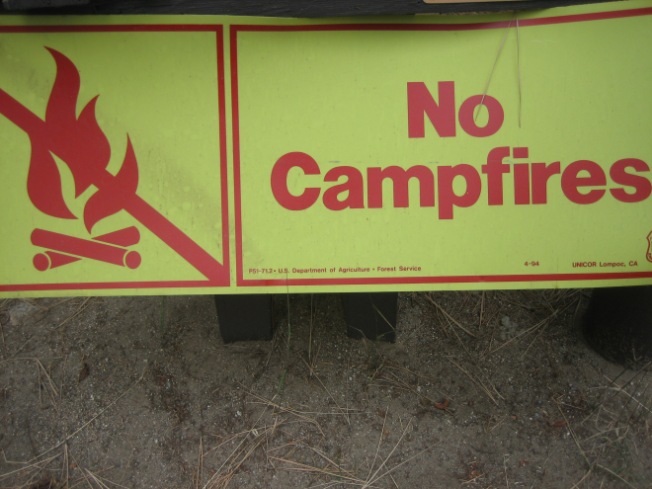 I took this photo of my campground’s fire ban sign.

I found no evidence of fire on that campsite during the rest of that family’s stay. I guess they got the message.