According to The Sequoia Visitor (“The Official Guide of Tulare County, CA”), “Crescent Meadow was one of John Muir’s favorite meadows.” He called it the “gem of the Sierras.” 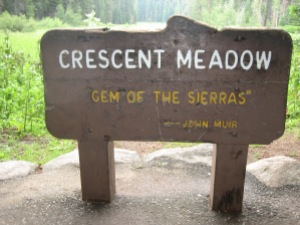 After I climbed Moro Rock, I took the shuttle to Crescent Meadow and started walking on the flat, paved trail running alongside the meadow. The Sequoia Visitor says the trail is “well maintained and not strenuous,” which was true. Because of these factors, there were a lot of people on the trail, adults talking loudly about ridiculous things I had no interest in hearing and kids shrieking, howling, and squealing. 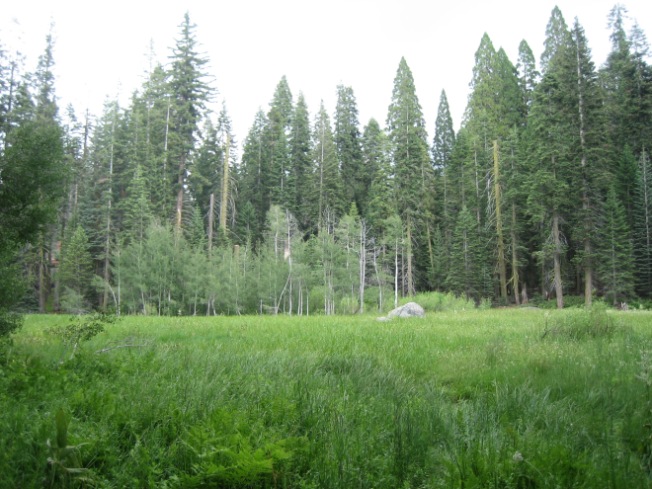 As soon as I could, I got off the popular trail and started hiking on the more strenuous dirt trails, even though my backpack was heavy with laptop, I hadn’t brought my walking stick, and I was mildly concerned about getting lost or getting attacked by a bear (or getting attacked by a bear after I got lost). Despite my concerns (“fear” is really too strong of a word for what I felt), it was heavenly to be way from people and on my own in the moist quiet while I walked among the sequoias.

I’m not a church-going woman. The last time I attended a church service must have been some time during the last century and that was an accident. But when I’m in the woods, especially among the big trees, that’s holy to me. I want respectful silence or, at most, reverent whispers. I don’t want to be subjected to inane human conversation.

Crescent Meadow was lovely. I see why Mr. Muir liked it. 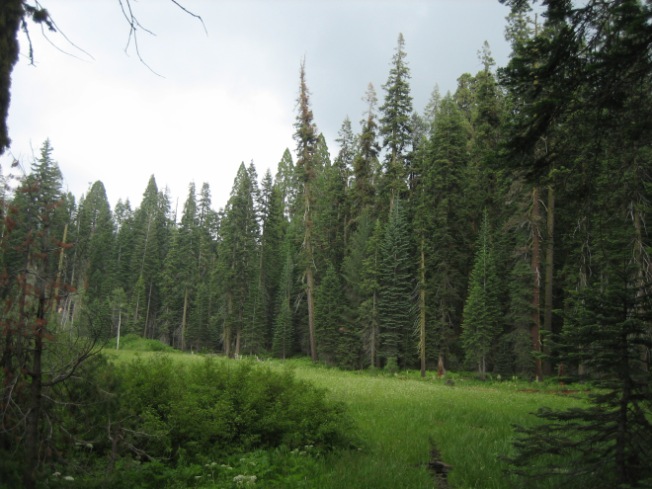 The lovely Crescent Meadow. I see why Mr. Muir liked it.

But I’ll tell you, I’m just not that into meadows.

Within the last year, a friend told me she’s not so excited by waterfalls. They’re nice and all, she said (I’m paraphrasing), but they just don’t do much for her. I thought it was a little weird. How can a person not find a waterfall exciting? It’s water tumbling over rocks! But now I understand because that’s how I feel about meadows. They’re nice, but what’s the big deal?

I’ve met people at my campground who are really excited about meadows. Campers like the meadow adjacent to my campground. They walk around in it. (I tried that one day, but I got worried about snakes possibly hiding in the grass, ready to bite if disturbed. I exited the meadow before going very far.)

One day a male/female couple were looking around my campground as a future camping possibility, and they went on and on about how beautiful a nearby meadow was. Then they insisted on showing me photos they had taken of the other, beautiful meadow. I was too polite to say it, but the beautiful meadow in the photo didn’t look any different from the meadow we were standing right in front of.

In the photos below, can you tell which is Crescent Meadow and which is the meadow I live next to? 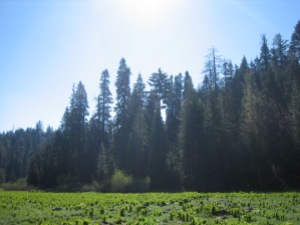 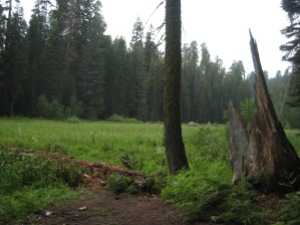 Another time, when I asked people driving around my campground if they were looking for a place to camp, the woman in the passenger seat said no. She said they were looking at the meadow because she was thinking of painting a picture of it. Why would anyone want to paint a picture of a meadow? There’s nothing in it but grass (with maybe a snake or two hiding out there) and maybe some wildflowers. My meadow has a few rotting logs and sometimes cows are in it. Not a lot of excitement out there. Grass…not very visually stimulating.

Maybe it’s just because I grew up in a land of much vegetation, but meadows seem rather boring to me.

However, Crescent Meadow is very pretty, and I can see why John Muir liked it. I could never pick a favorite meadow, though, because they all look pretty much alike to me.